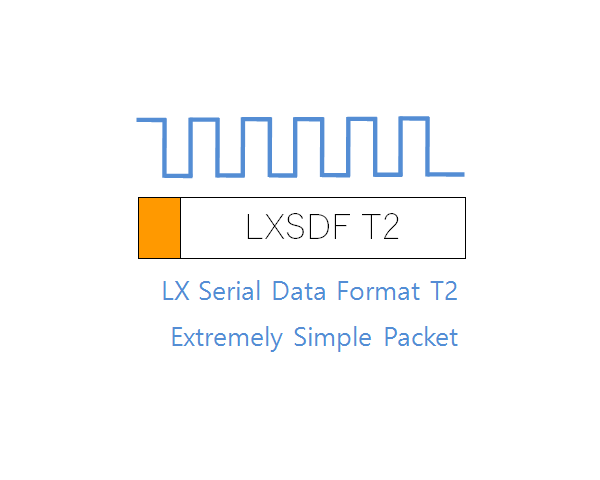 LXSDF T2 Tx packet uses initial 2 bytes for each packet transmission as “Purpose for Synchronizing Packet”. The first byte is allocated the fixed value 255(0xFF in hex), and fixed 254 (0xFE in hex) for second byte. Namely, Sync Bytes are designed only in the spots where appear 255 and 254 sequentially in the whole packet byte arrays.

The following picture indicates that the orange color part in the first 1 packet is assigned “Sync Bytes” and then a series of bytes for one packet.

The table shows the definitions of T2 Tx packet. Each index is one byte and transmitted sequentially in order when transmitting serial data. An available value for each packet index, the terms of the packet elements.

+1 for every one packet transmission and start 0 again after the maximum value.
By using PC, it is necessarily used to identify the data transmitted to PCD every packet.
The maximum of PC value gets different value according to PCD Type value. If PCDT is 0, PC maximum is 31.

Allocated data is different for each product. Mainly, information data to transmit at high speed is allocated.